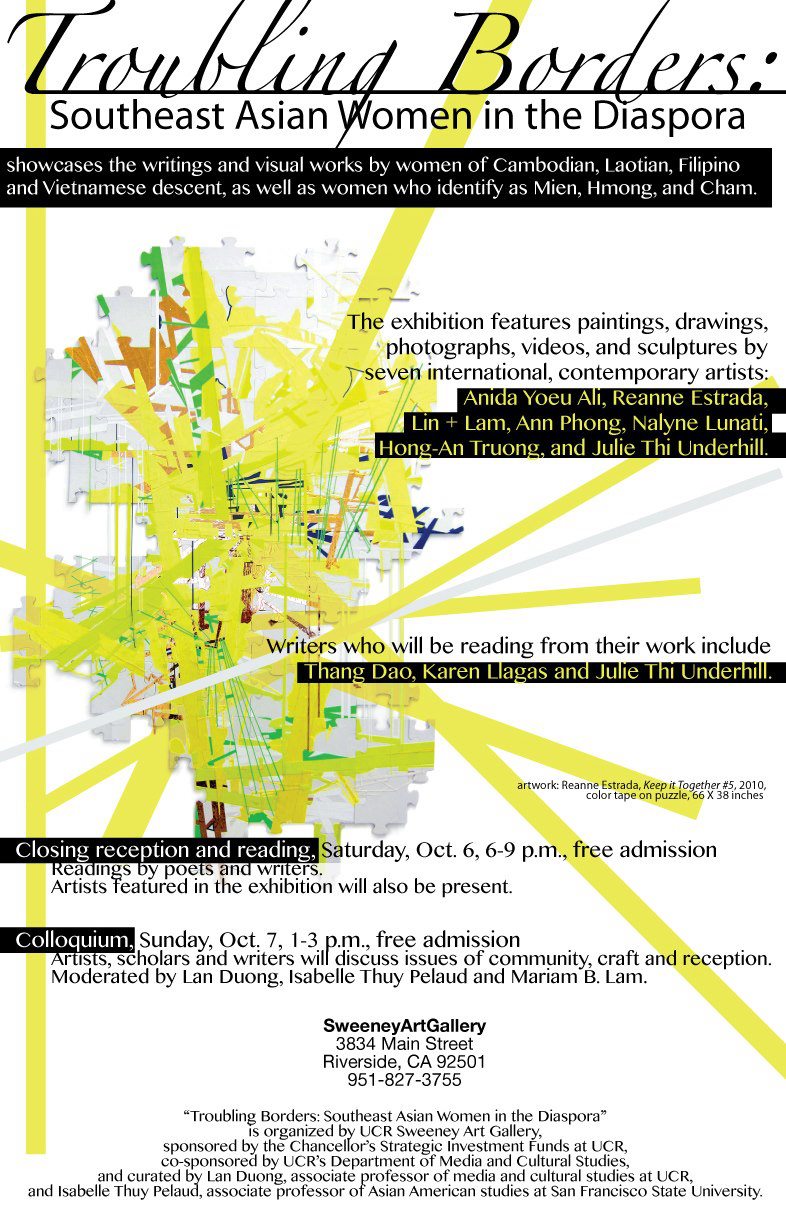 RIVERSIDE, Calif. – UC Riverside’s Sweeney Art Gallery presents “Troubling Borders: Southeast Asian Women in the Diaspora,” which showcases writings and visual works by women of Cambodian, Laotian, Filipino and Vietnamese descent who create art that bear witness to the legacies of displacement and the hauntings of empire that linger to this day.

A diverse group, these women writers and artists point to the ruptures caused by colonization, war, globalization, and militarization, said Tyler Stallings, director of Sweeney Art Gallery and artistic firector for Culver Center of the Arts. “Their stories and artwork are vital and varied, and together they provide a sharp contrast to normative narratives and ideologies that have been constructed in the West and the nation-states of Southeast Asia, particularly in the aftermath of the Cold War,” he said.

This multimedia art exhibition and Oct. 7 colloquium also previews the contents and celebrates the upcoming publication of the first anthology by and about Southeast Asian women in the diaspora. Four years in the making, “Southeast Asian Women in the Diaspora: Troubling Borders in Literature and Art” is edited by Isabelle Thuy Pelaud, Lan Duong, Mariam B. Lam and Kathy Nguyen.

By making these works visible to a large public and pushing the boundaries of literature and art, the editors highlight the global connections that draw many disparate groups of women together. The art exhibit and colloquium form one part of these larger efforts to promote the works of Southeast Asian women.

Readings by poets and writers from the anthology, “Southeast Asian Women in the Diaspora: Troubling Borders in Literature and Art.” Artists featured in the exhibition will be present. The evening will also be the closing reception for “Michael Shroads: Drag & Logged Sculptures + Noise Drawings” that is featured in the UCR Culver Center of the Arts atrium.

Artists, scholars and writers from the anthology will discuss issues of community, craft and reception. Moderated by Lan Duong, Isabelle Thuy Pelaud and Mariam B. Lam.